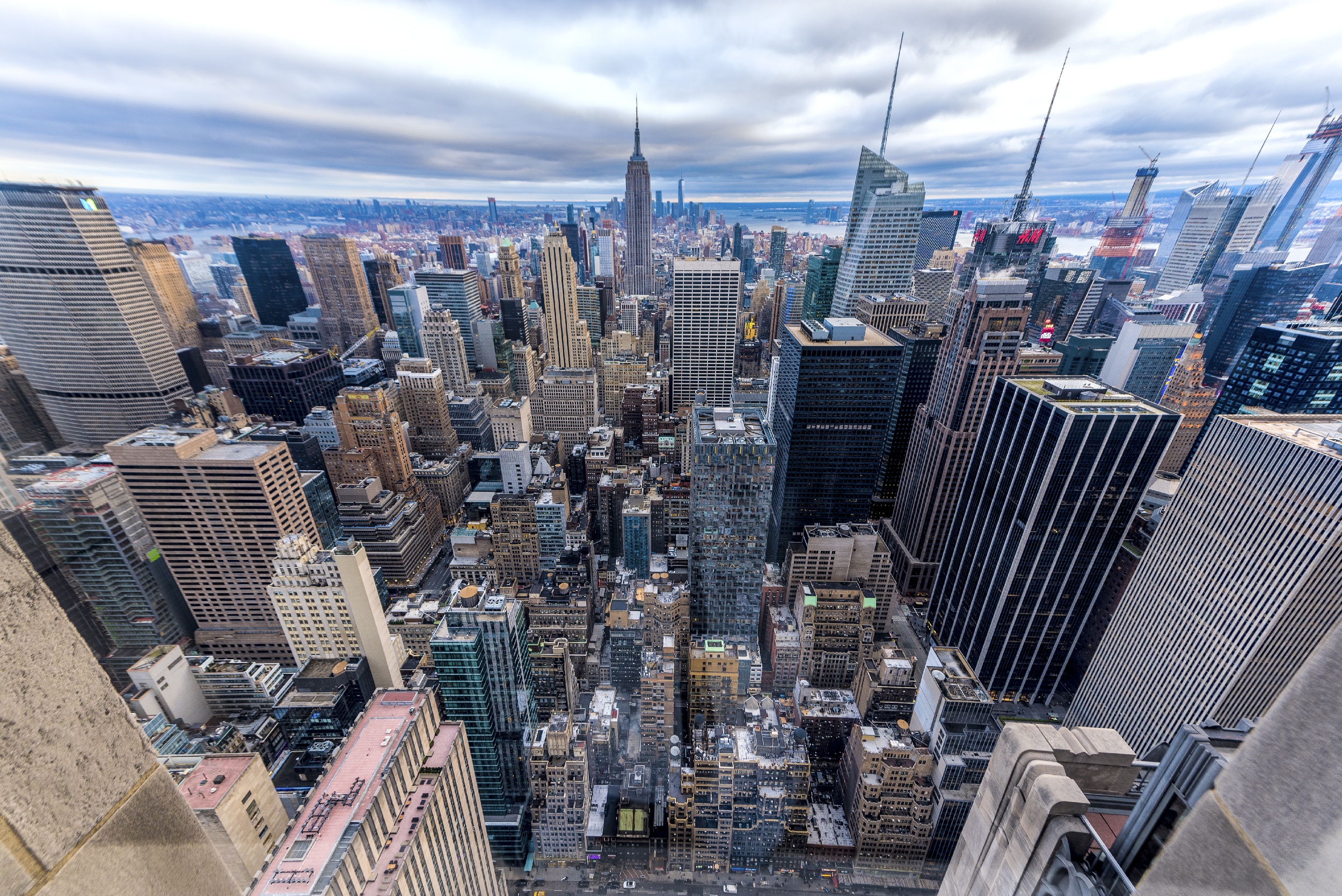 My first photo trip ever took me and 22 other photo enthusiasts to the USA in mid-April 2018. Born of the idea of ​​two professional photographers to offer a 1 week photo tour to New York. For me, a long-cherished wish to travel to the United States of America again came true. Already in 1986 I visited Florida and California.

I took this opportunity to extend my trip in time. So I decided and planned to fly from New York to Phoenix, Arizona, in order to drive another 4 1/2 weeks through the west of the USA on my own from there with the rental car.

Everyone came for themselves. It was agreed to meet at a bar in Times Square on the day of arrival in the evening. So we first got to know each other personally and then discussed the exact process, which was already known, in detail. 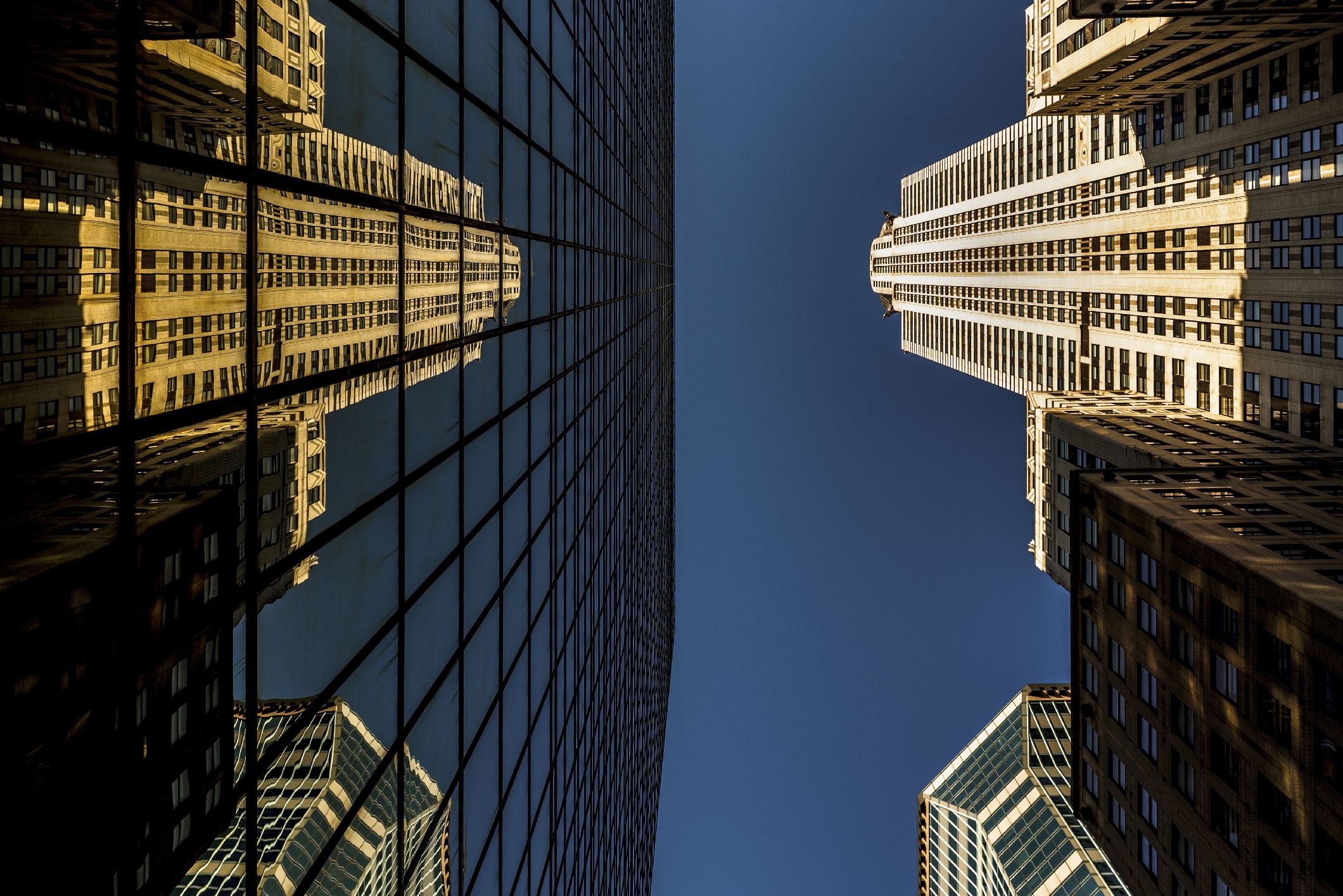 Out of nowhere, torrential rain fell on us. People crept under roofs, ran into shops, disappeared from the picture. Suddenly the streets were almost empty. Whoever had an umbrella or was in the car or bus won. But then it ripped open. The sun brought the beautiful soft light. Exactly the right time to start looking for beautiful motifs again.

This puddle already offered itself to capture the people reflected in it, the formation of buildings and changing facades in their most beautiful presence. 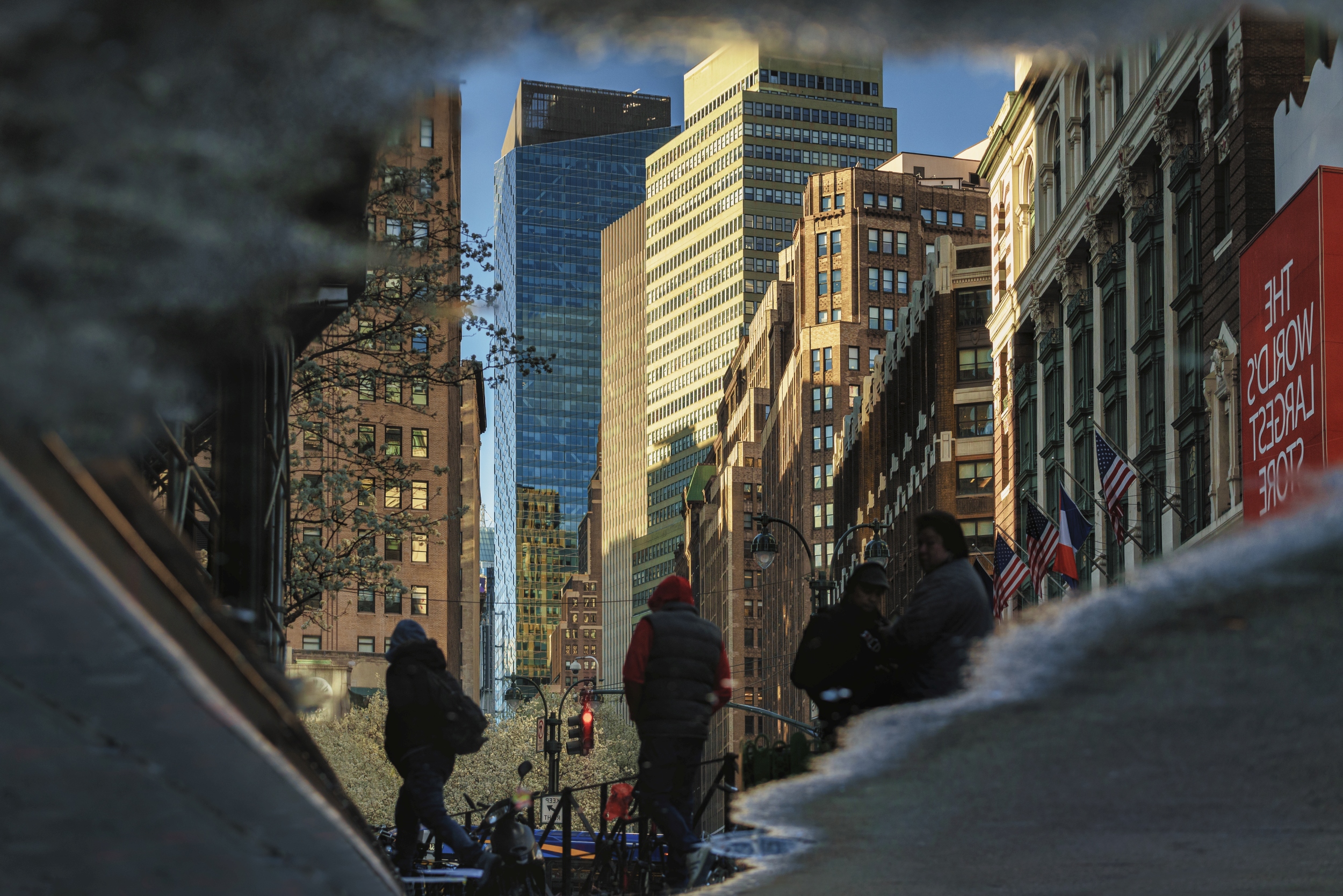 On the day in question it was too glorious and really lucky that after heavy rain showers in the morning and into the afternoon, the sky, covered with dark clouds, opened up. Clear and crisp light helped to create the finest reflections in the puddles. One can imagine such a bunch of „photo maniacs“ taking every opportunity to implement what they have learned. For all of us, a great group who had incredible fun.

We all experienced this remarkable metropolis with a number of really special impressions that can only inspire photo freaks. 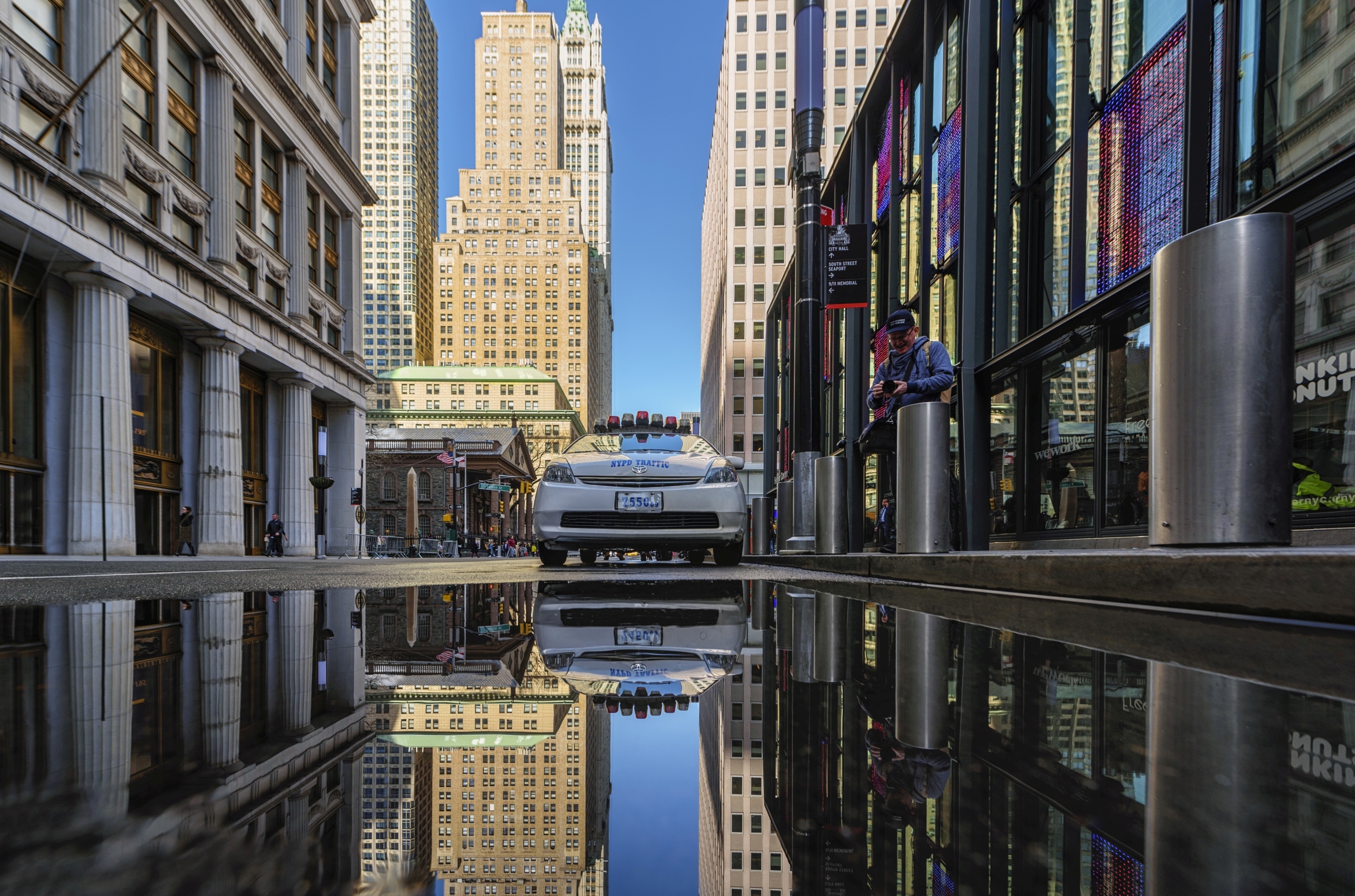 Exploring and experiencing New York City in one week was an amazing and spectacular experience. But where do you start in this city, where do you stop. Sightseeing without end, highlights and a lot of things to see, marvel at and discover. Be it in the midst of the ants or away from the hustle and bustle, NYC has it all.

Another highlight of our joint photo academy workshop in 2018 was to visit the freight train route in western Manhattan, which was converted into a park between 2006 and 2014. The High Line stretches 1.4 miles, beginning at W 34ThSt, ending at Gansevoort St / Washington ST.

Worthwhile and worth seeing are the opportunities to observe the hustle and bustle on NY streets and ravines, as well as the impressive different architecture, also from higher points like this High Line. I was fascinated by this picture, among other things. It almost felt like a puzzle to me. Where should I start and look first to capture everything. But no problem, we had a good three hours to cover the entire route, so there was enough time to delve into many details.

If you travel to New York, you should definitely visit Ground Zero to admire the Oculus, which was built by the Spanish star architect Santiago Calatrava next to the former twin towers of the World Trade Center. Oculus is the name of the transport hub that provides access to eleven subway lines in Lower Manhattan.

Like a bird, the huge and futuristic white complex, next to the tall skyscrapers of the new World Trade Center, spreads its wings and inevitably, without hesitation, leads my gaze through the white steel skeleton, up along the glass and clinker facades, into the of Cloud covered sky. For me, being out and about in New York with my camera didn’t just mean looking for subjects at eye level. In this city, the inevitable view leads again and again upwards or from the very top over NYC. 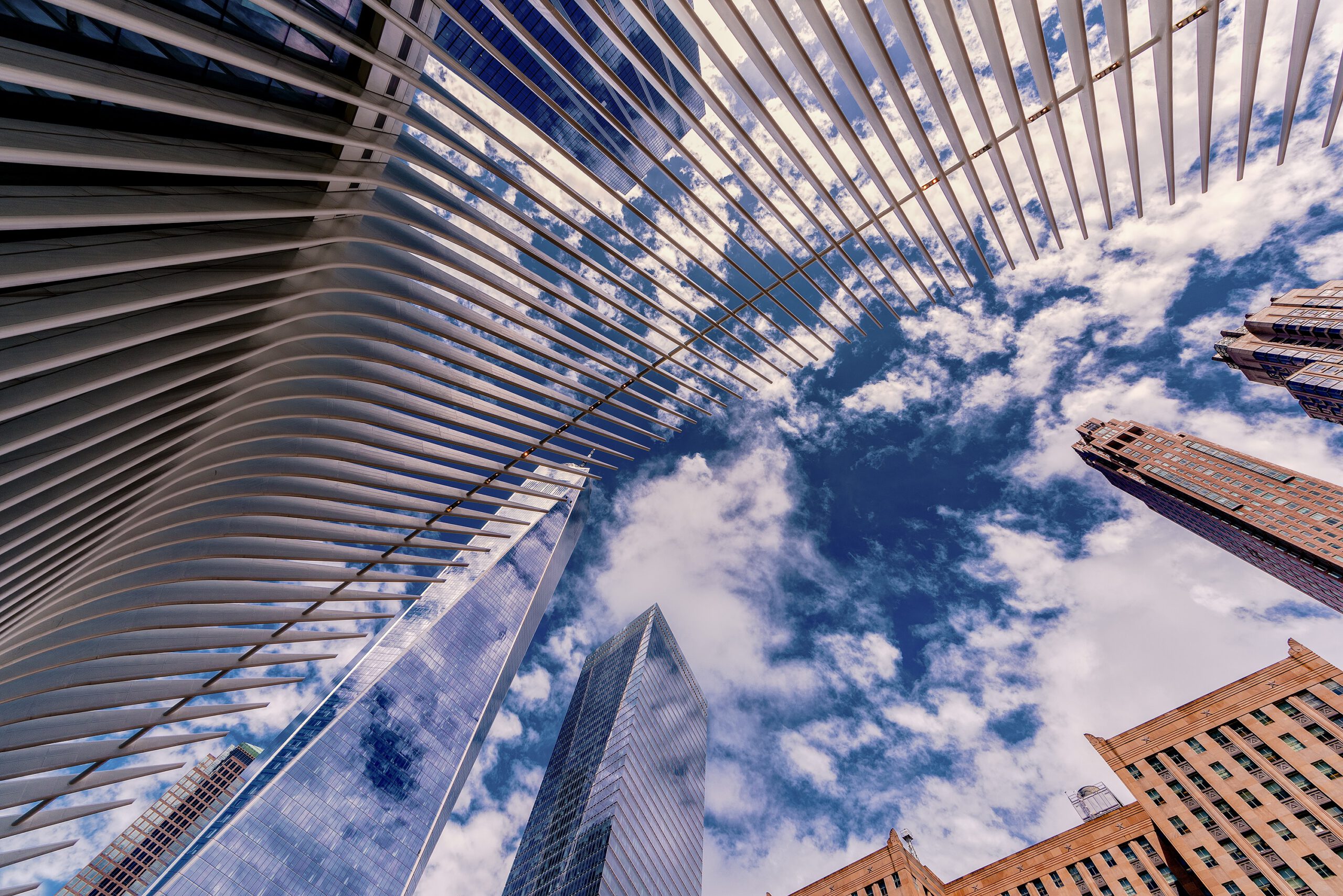 New York invites you to walk and of course take the subway, like here at the Pelham Parkway station, waiting for the next subway. We always had time for a (photographic) stop…..

Some typical street scenes I captured during my visit to New York. Somehow the New Yorkers always seemed to be busy and on the move, as was our entire photo troupe, engrossed in the city.

New York is still considered the Mecca of graffiti culture, which is one of the reasons why graffiti artists from all over the world make the pilgrimage here to immortalize themselves somewhere in this city.

Works of art and messages emerge from their spray cans, which they leave behind for themselves and for us. I’ve always found graffiti to be kind of cool, especially when I can see something from it that appeals to me and convinces me, like this expressive and large-scale work of art, …….love comes in every color. 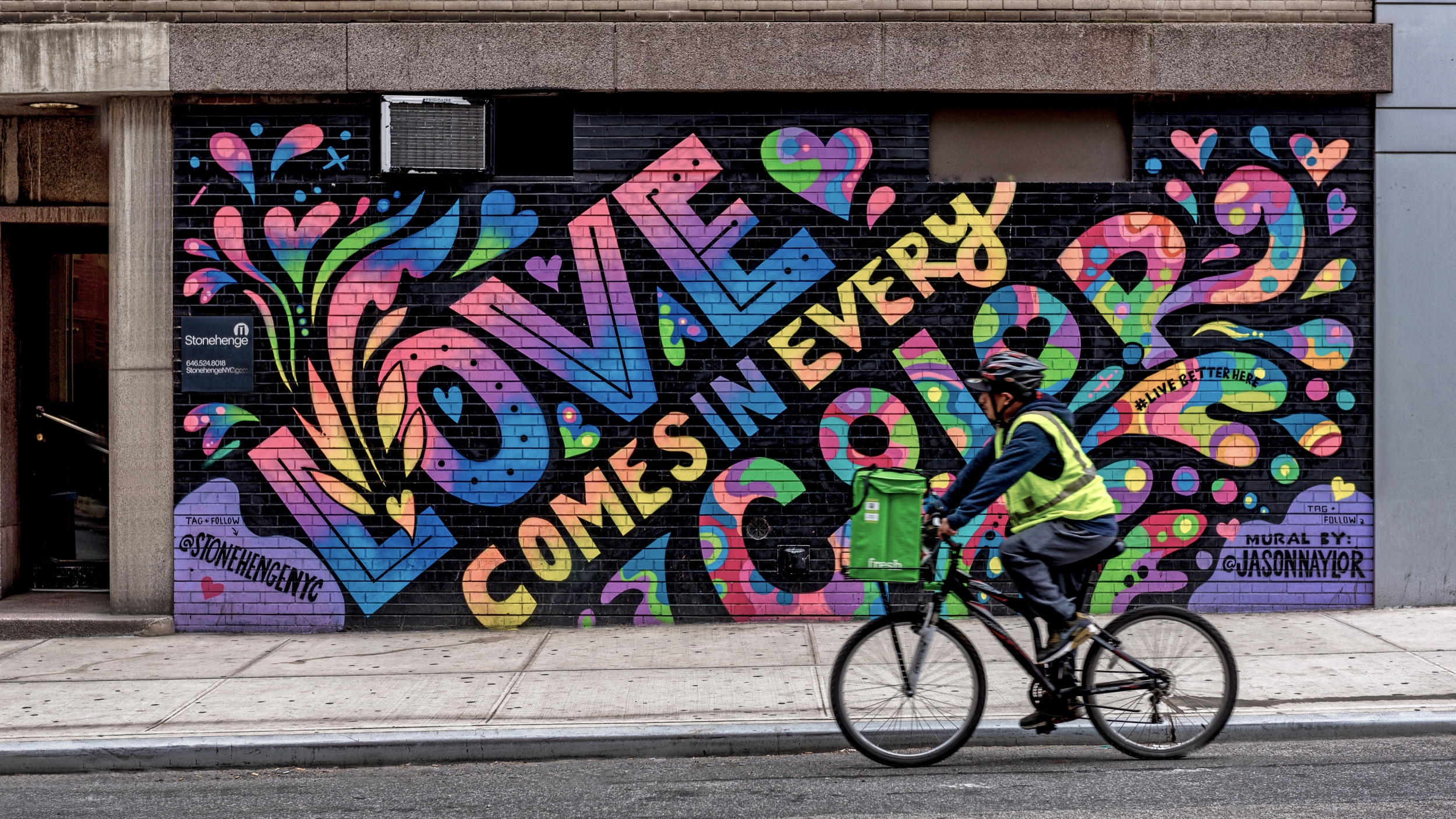 After the sun has already set, the lights of the big city begin to take their place to draw people into their nightly spell. The darker it gets, the more the evening mood changes into the nocturnal urban jungle. Now the hustle and bustle on the streets gets a very special and own liveliness.

For me it wasn’t the weight of my photo equipment, that was quickly forgotten. It was more the orientation that I had lost for a short time with increasing darkness, in the crowd and in the intoxication of taking photos. 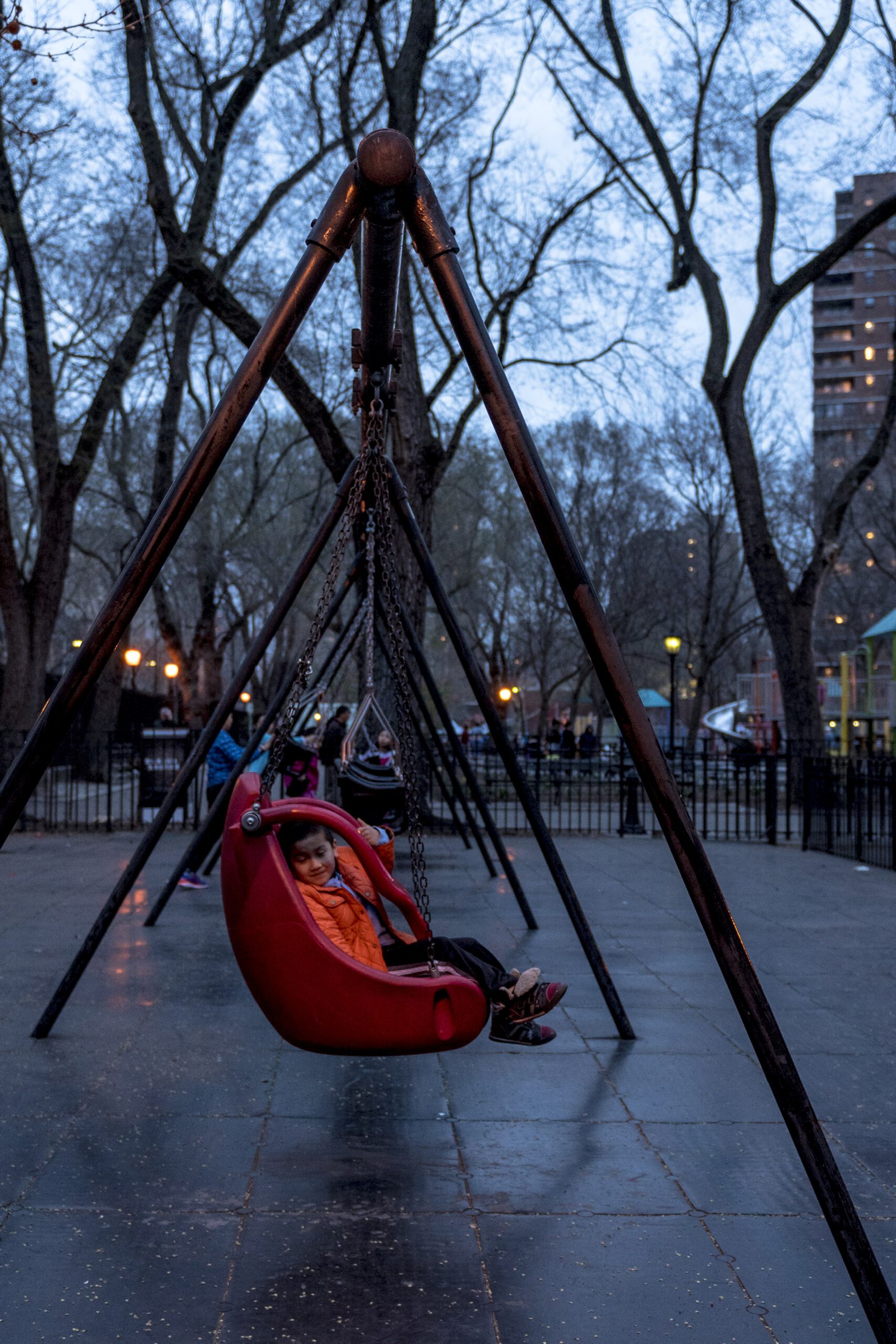 It rained in New York City that night. In the morning, too, there seemed to be no improvement in sight. Doesn’t matter. Well equipped with an umbrella in weatherproof gear and a packed photo rucksack, we set off early for the next breakfast cafe. The goal was the Statue of Liberty, although it was rainy and quite cool at the same time, it in no way deterred us from visiting the Statue of Liberty as planned.

Around noon it even stopped raining, it got lighter and cleared up. A real blessing for all passengers who now boarded the Manhattan. We cruised the Hudson River and East River for a good hour and a half and were rewarded with this incredible and probably one of the best views of this breathtaking skyline. For me it wasn’t the weight of my photo equipment, that was quickly forgotten.

When it gets dark, the photographer is happy and sees that he is in the right place at the right time. Walking across the Brooklyn Bridge to the lower bank, the opposite skyline of Manhattan presented itself, shrouded in an incredible sea of ​​lights. As always, I use the opportunity of my passion to take pictures with a special zoom technique from time to time. 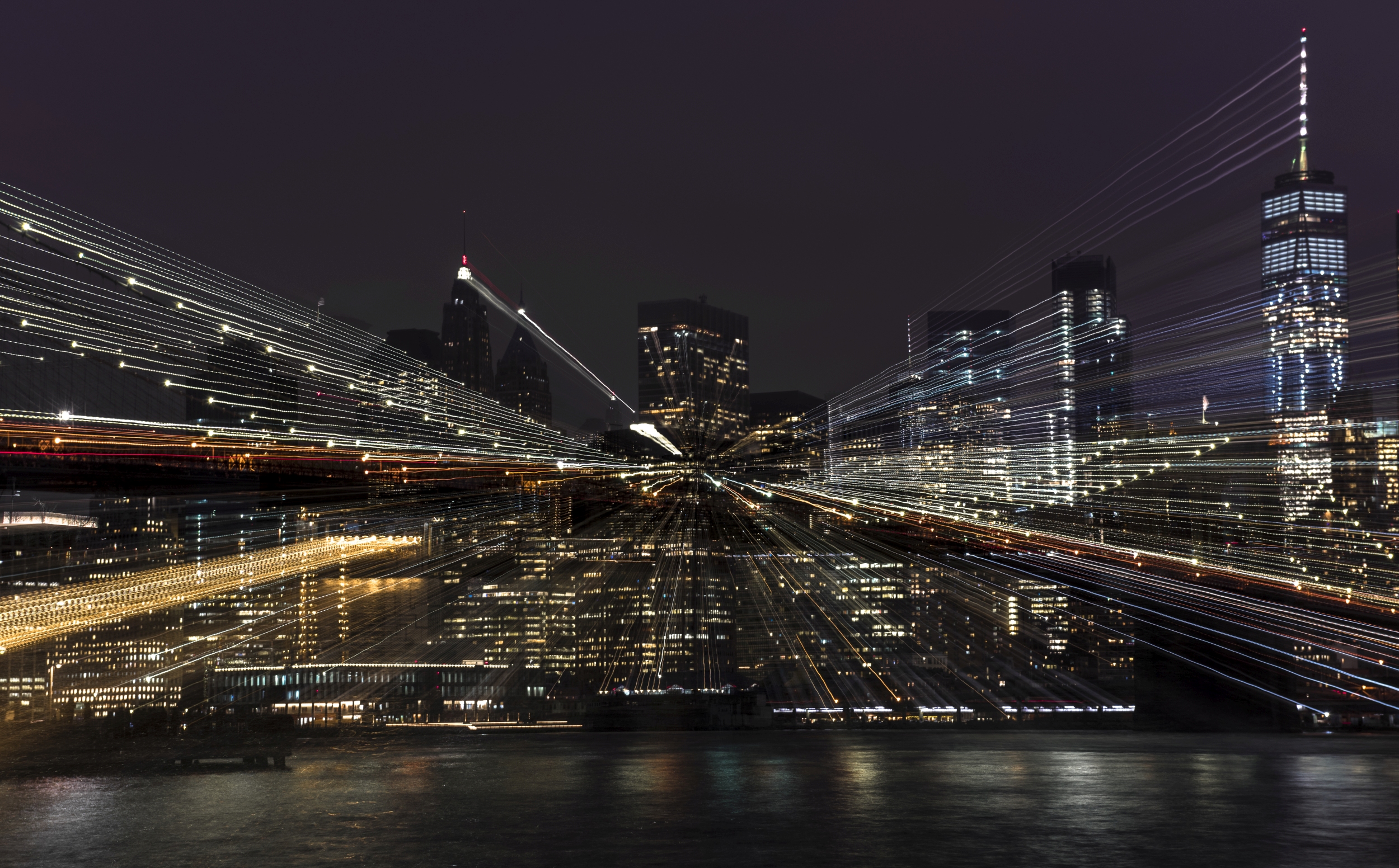 Who sleeps in this city that itself never sleeps. Visitors certainly are, especially if they are visiting NY for the first time. Up to the dolls on the way and like here, early in the morning to Times Square. I had checked into the hotel „Manhatten at Times Square“ so that I only needed to be right in front of the door for this picture.

Nestled among the skyscrapers is the famous and beautiful „The Knickerbocker Hotel“, a real legend in Manhattan, which only reopened in 2015 after 90 years of slumber.

In the morning it still looked quite cloudy and rain had been spreading since the morning hours. But as usual, that didn’t deter us photo freaks. The whole day was time for the weather to catch up. The sky was already getting lighter around noon, even if it remained cloudy, which could only be good for the composition of the picture. Rain was no longer in sight, that mattered much more to us.

In the late afternoon we reached this imposing bridge structure, the Brooklyn Bridge, which we had long awaited, beamed with joy and was very impressed. It is one of the oldest suspension bridges in the USA and, with a length of 1825 m and a width of almost 26 m, spans the East River and connects the districts of Manhattan and Brooklyn. The architectural height is 84 m, the clear height: 41 m.

What a dimension that cannot be put into words or in spirit. At least that’s how it felt for me, I thought back to my professional time when I worked as a welder in bridge and heavy construction for a few years. So I was used to quite a bit, but this was beyond my imagination many times over.

It is also called the Bridge of Longing because it quickly became a symbol of the dream of a better life for Americans. For me, a long-awaited dream came true. Not only to have been to New York once, no, to finally stand on this so famous architectural bridge structure to let this unbelievable and gigantic skyline hit me. 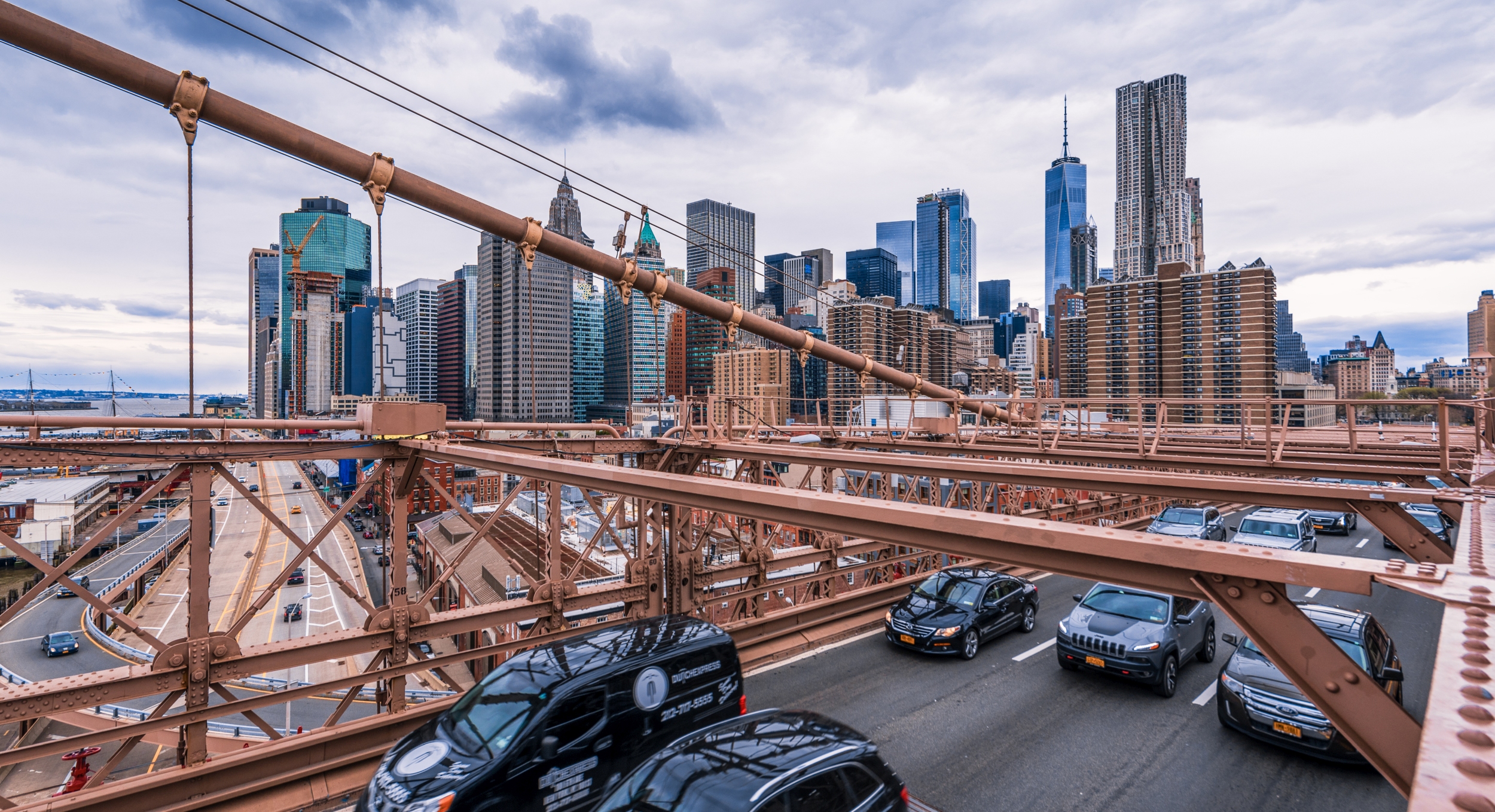 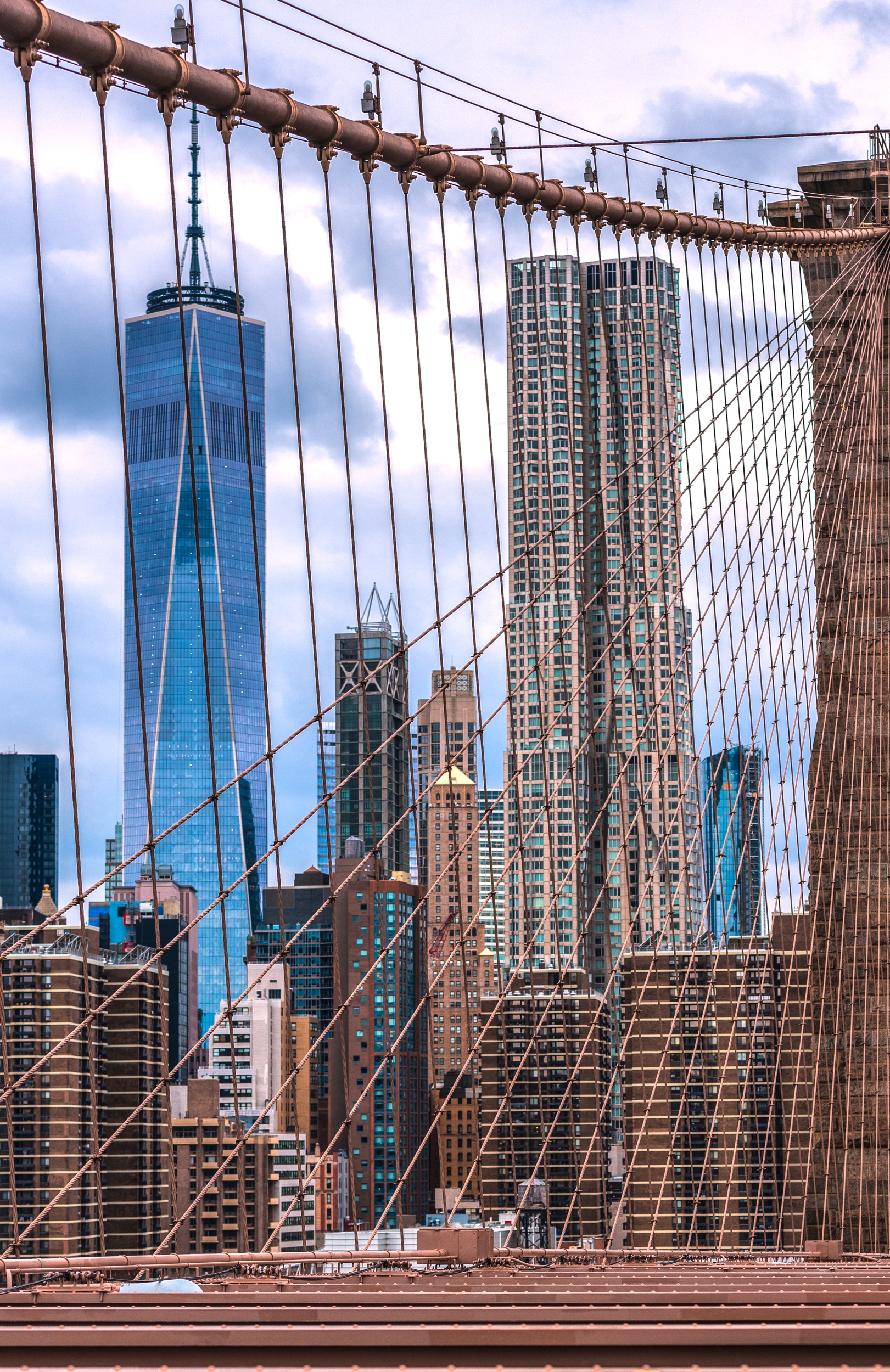 As a 319m high skyscraper in New York City, 405 Lexington Ave, corner of 42nd Street in Midtown Manhattan, it is one of the landmarks of the metropolis.

Even if the building has already been staged millions of times, it was certainly just as important to me as it was to many before me, not only a must, but also a challenge. 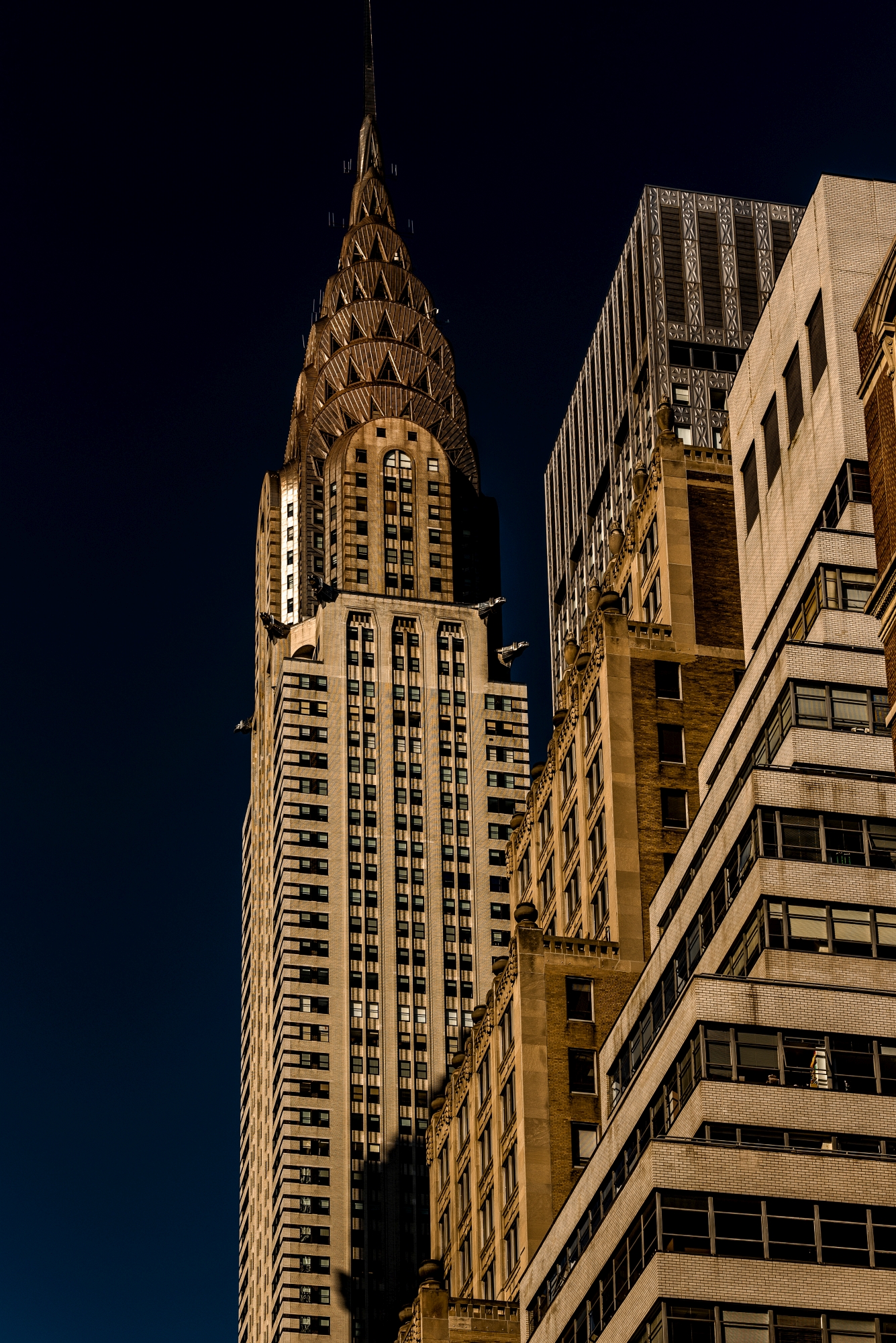 It was our last day in this incredible city. It was now time to say goodbye to the fantastic photo workshop with its enthusiastic participants, as well as to this incredible metropolis itself. So for some of us it was time to get up very early. Downstairs in the hotel lobby I met three photo friends, we all stayed in the same hotel in Times Square, to go on tour together one last time until noon….not without our camera, of course.

The very first step out of the revolving door of the hotel was a dream, the sky was bright blue and looked like pure sunshine. Class. But first we wanted to strengthen ourselves, time for breakfast. We set off from 7th Ave without going too far from the hotel. Finally, two of us had to be at the hotel at 12:00 to check out. So in a nutshell, a good mile criss-crossing around 5th Ave was planned. Truly enough spectacle to let one last time in this city photographically a little.

Being on the road with four is not that easy. Everyone swarms out somewhere, lingers on their objects, not noticing what the others are doing, let alone where they are at the moment. But we had practiced well for over a week. So it’s not an issue to find each other again quickly. Always keep an eye on the gold clock on 5th Avenue.

Finally, on the way back to the hotel, we finally treated ourselves to New York’s very famous cheesecake. Wow. What a taste. The absolute bang. Creamy, powerful and damn delicious…… 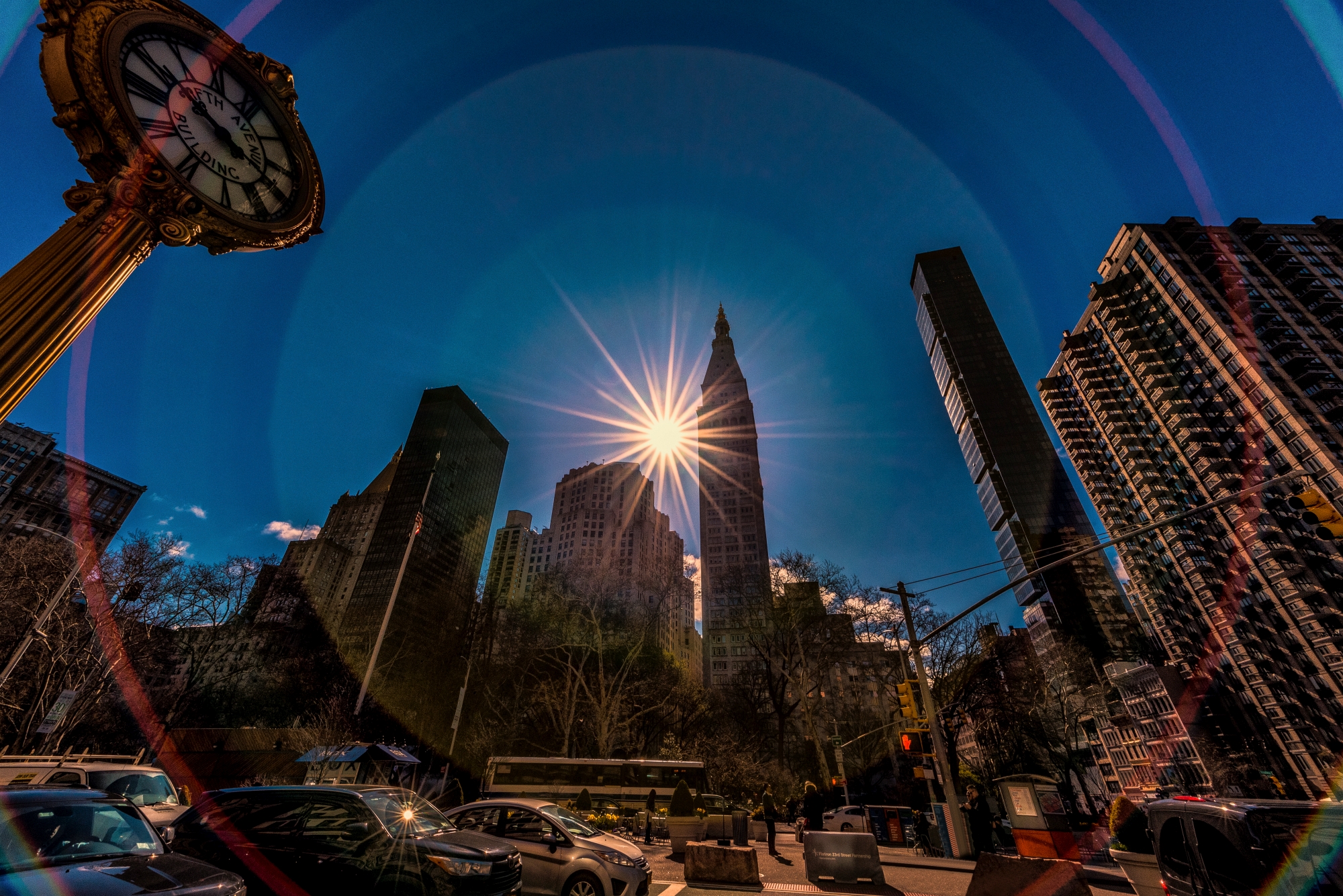